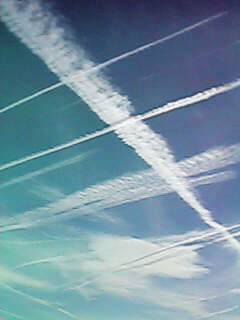 This is a reply to the message pasted below to our Santa Cruz Ron Paul Meetup from one of the members:

Where are you getting your assertedly authoritative information? Because the post below looks a lot like recirculated propaganda to me. At this point, nobody knows what is causing global warming, though recently there seems to be a strong scientific consensus that solar activity is the dominant factor.

At any rate, “chemtrails,” which you blithely explain at the bottom of your post, do, in fact, contain barium and aluminum salts, both of which are very toxic to humans. In spider-web like strands found precipitating from them in multiple locations, various strange biological particles have been found, some of them eerily similar to dessicated red blood corpuscles. There are also aromatic hydrocarbons found in analysis of air taken by planes from the area of the trails themselves. Some people think that chemtrails are the source of the new disease called Morgellons syndrome, a strange skin condition .

This is a massive, global-wide project, the budget for which MUST be completely off the scale, hundreds, if not thousands of flights on a daily basis. This chemistry is attacking the immune systems of us all. This is so massive, that in satellite photos of the earth a white haze can be seen in the atmosphere, dramatically different than just a few years ago.

The government has been denying, then leaking spun information and spreading disinfo via the web, etc., repeatedly for years about this obviously human (military) caused phenomenon. The latest spin, hand in hand with the propaganda of Al Gore’s “An Inconvenient Truth,” seems to be that this is fighting global warming, as you assert in your post. Also obviously, a huge number of people must be involved in this project and the decision-making related to it, and to the secrecy surrounding it. How can this not be a conspiracy (particularly when we’re all breathing it)?

There has been a lot of speculation that putting these particulates into the atmosphere is related to electromagnetic frequency mind manipulation by the HAARP project and other EMF emission programs run by the military, who have espoused the doctrine of “full spectrum dominance” of the world, and have stated in their own documents that the enemy, and the battlefield, as seen by them, includes the people of America and their thinking and beliefs. People who have enough power to create a program like this and run it over our heads on a daily basis without the least transparency tend to run scenarios constantly to explore the options in their ongoing wars for control. They seem to very much prefer “synergies” where policy initiatives can cover multiple bases at once, as well as to have plausible deniability whenever their “hands get caught in the cookie jar.” So, this massive spraying is to protect us from climate change, never mind that we’re being poisoned as well as perhaps subjected to mental/emotional control. Not to mention that when and if a “world pandemic” might suit the agenda, the vector for spreading it is already conveniently in existence.

I would assert that whatever is happening is part of a great transformation that is beyond the control of the so-called “World Management Team.” It’s obvious that we’re facing profound changes in our ways of living, and coming relatively soon. Perhaps things might work better if we take the view that we CAN adapt to whatever is coming, and that it’s all part of what simply IS. But continuing to accept a situation where elite controllers, rather than share information about situations affecting everyone, feed us lies and partial truths designed to ensure our compliance, is not working for us. For me, this is central to what the Ron Paul Revolution is about.

This could be, but the animal world is feeling the consequences. We could be in a warm cycle-but it has been amplified.

The Jurassic was abundant in CO2-much much so, and the climate was correspondingly warm with minimal solid water at the poles. The oceans were greater-and the interior of what is now North America was the Tethys Sea.

Since the Cenozoic, the earth has been overall cooler and drier than in its younger years. Ice ages come and go, as do warm periods, but the amplitude of temperature extremes seems to be an absolute value-that is-there are no cold bouts per se but more warm bouts.

The rest of the animal kingdom can not evolve quickly enough to compensate for the rapid warming. There is a great anthropogenic mass extinction occurring right now due to habitat loss, the chemical, etc. industry, and due to climate change.

This really is not debatable, it unfortunately is reality.

Look up in the sky on any clear day and you will witness geo-engineering. Massive trails from jet exhaust streak the sky and expand into clouds. Tiny particles of aluminum and barium are contained in those clouds-along with unknowns.
The metal reflects solar rays back into space and cloud formation and induced precipitation is possible.

Some people call them chemtrails. These are in our sky every day since the late 90’s.

These are not contrails, and this is not a conspiracy. These are emergency measures to combat global warming on a massive scale. This is going on world wide. Look in the sky and you shall see.

1 Response to An Inconvenient Truthiness