The Continuity in Government Project 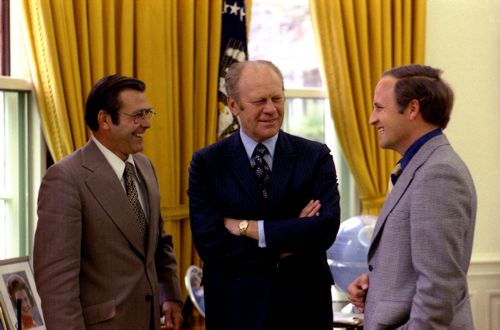 The political infrastructure for martial law in the U.S. is already in place. Apparently unsure that the USAPATRIOT Act(s) and the Military Commissions Act weren’t strong enough, on May 9, 2007, Bush issued a document doubly titled “National Security Presidential Directive/NSPD 51″ and “Homeland Security Presidential Directive/HSPD-20.” This document supposedly outlines the federal government’s plan for maintaining continuity in the face of a “catastrophic emergency.”

“Catastrophic emergency” is defined as “any incident, regardless of location, that results in extraordinary levels of mass casualties, damage, or disruption severely affecting the U.S. population, infrastructure, environment, economy, or government function.” So, pretty much anything…

In the event of this improbable catastrophe, this unconstitutional legislation by the executive grants itself supreme power to ensure the continuity of Constitutional government. Good one.

In other words, NSPD 51/HSPD-20 would impose martial law under the authority of the White House through DHS. It would suspend constitutional government under the provisions of Continuity in Government (COG).

Since 2003, following the invasion of Iraq, Homeland Security (DHS) has contemplated time and again the possibility of a so-called code red alert “scenario” — using a potential or possible Al Qaeda terrorist attack on American soil — as a pretext for implementing martial law. At one time, Tommy Thompson Former Health and Human Services Secretary said that if we “went to” Code Red the entire civilian government would “shut down.” There are no known provisions for returning America from Code Red status, once it is invoked.

Michel Chosudovsky in “Bush Directive for a “Catastrophic Emergency” in America” writes:

“This Combined Directive NSPD /51 HSPD 20 grants unprecedented powers to the Presidency and the Department of Homeland Security, overriding the foundations of Constitutional government. NSPD 51 allows the sitting president to declare a “national emergency” without Congressional approval The adoption of NSPD 51 would lead to the de facto closing down of the Legislature and the militarization of justice and law enforcement:

NSPD 51 grants extraordinary Police State powers to the White House and Homeland Security (DHS), in the event of a “Catastrophic Emergency”. The Assistant to the President for Homeland Security and Counter terrorism (APHS/CT), who is slated to play a key role in the eventuality of Martial law, is a key White House adviser, Frances Fragos Townsend.”

Of course, preparations for emergency management of the U.S. Government has by this time become a tradition here in the Homeland.

According to William M. Arkin in “Shadow Government” in the Case of a “Second 9/11:”

“Continuity programs began in the early 1950s, when the threat of nuclear war moved the administration of President Harry S. Truman to begin planning for emergency government functions and civil defense. Evacuation bunkers were built, and an incredibly complex and secretive shadow government program was created. At its height, the grand era of continuity boasted the fully operational Mount Weather, a civilian bunker built along the crest of Virginia’s Blue Ridge, to which most agency heads would evacuate; the Greenbrier hotel complex and bunker in West Virginia, where Congress would shelter; and Raven Rock, or Site R, a national security bunker bored into granite along the Pennsylvania-Maryland border near Camp David, where the Joint Chiefs of Staff would command a protracted nuclear war. Special communications networks were built, and evacuation and succession procedures were practiced continually. When the Soviet Union crumbled, the program became a Cold War curiosity: Then-Defense Secretary Dick Cheney ordered Raven Rock into caretaker status in 1991. The Greenbrier bunker was shuttered and a 30-year-old special access program was declassified three years later. Then came the terrorist attacks of the mid-1990s and the looming Y2K rollover, and suddenly continuity wasn’t only for nuclear war anymore. On Oct. 21, 1998, President Bill Clinton signed Presidential Decision Directive 67, “Enduring Constitutional Government and Continuity of Government Operations.” No longer would only the very few elite leaders responsible for national security be covered. Instead, every single government department and agency was directed to see to it that they could resume critical functions within 12 hours of a warning, and keep their operations running at emergency facilities for up to 30 days. FEMA was put in charge of this broad new program. On 9/11, the program was put to the test — and failed. Not on the national security side: Vice President Cheney and others in the national security leadership were smoothly whisked away from the capital following procedures overseen by the Pentagon and the White House Military Office. But like the mass of Washingtonians, officials from other agencies found themselves virtually on their own, unsure of where to go or what to do, or whom to contact for the answers.”

Continuity in Government programs have been one edge of the wedge to wrest control of the U.S. government away from Constitutional authority and put it in the hands of the secret teams under the direction of hidden interests. The elite decision-makers behind this crypto-fascist coup obviously include big finance, military corporations, elements of intelligence, and interlocking corporations, and also have curious deep ties to the creation and sustenance of the State of Israel.

It’s commonplace humor to refer to Dick Cheney’s being in a “secure location,” but he and Donald Rumsfeld have been intimately involved in Continuity in Government (COG) since their days in Congress. I’ve read several articles on this connection, but was interested to find that I could find no reference to this, or to much at all about the ongoing development of COG programs since the onset of the cold war.

It’s also interesting to note that in Arkin’s excerpt above he notes that for most of Official Washington the COG measures in place failed to take account for them, serving instead only some short list of insiders. This begins to make obvious just who this government serves.