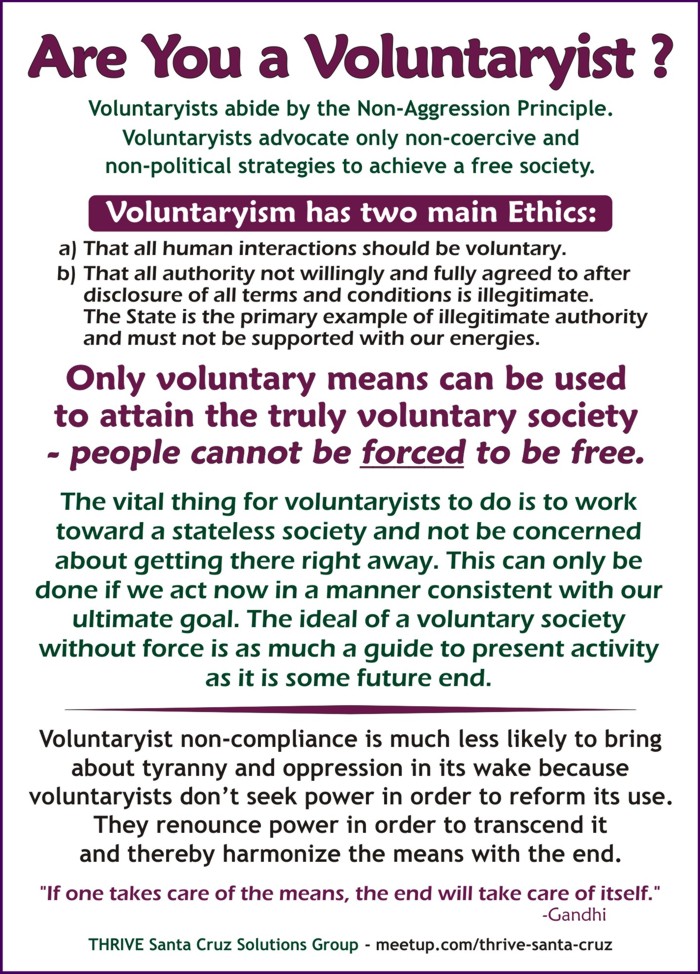 “The thought of how much the human race would have advanced without government simply staggers the imagination.”  Doug Casey, 1979

Voluntaryism is a name for a new model of human organization that can revolutionize world society to release people’s untapped and suppressed potentials.

Introduction from Voluntaryist.com: “Voluntaryism is the doctrine that relations among people should be by mutual consent, or not at all. It represents a means, an end, and an insight. Voluntaryism does not argue for the specific form that voluntary arrangements will take; only that force be abandoned so that individuals in society may flourish. As it is the means which determine the end, the goal of an all voluntary society must be sought voluntarily. People cannot be coerced into freedom. Hence, the use of the free market, education, persuasion, and non-violent resistance as the primary ways to change people’s ideas about the State. The Voluntaryist insight, that all tyranny and government are grounded upon popular acceptance, explains why voluntary means are sufficient to attain that end.”

The converse of Voluntaryism is often called Statism, or the idea there can exist a collective authority that supersedes the authority of individuals.

This Statist ideology pervades our culture and our world. This situation is often accepted by us as simply being “the way it is.” If we look at this carefully and clearly however, we’ll see that “the State” can only ever be a conceptual fiction under which individual humans act using this imagined collective authority. This has developed and has been perpetuated over thousands of years by rulers and their minions, who were under the erroneous and delusional impression that it created advantages for them that made their lives easier and more prestigious.

• Because most of us have accepted that this collective power is The Way It Is, we are conditioned to shy away from the consideration that it is never legitimate for us to give this imaginary State invasive privileges that we can’t exercise as individuals.

If people are to be responsible for providing their own abundance, then it is arguably in our own best interest that those around us are as strong and capable as possible, so society can flourish as a whole. Harming others’ abilities to perceive life with clarity and think critically about what they see would therefor only be hurting ourselves. Another corollary to this is the idea that when we attack others, we also feel attacked ourselves at a subconscious level. What goes around, comes around. We then live in a world of fear. This fear is increased if we face irrational, authoritarian, defensive and psychopathic behaviors by “Leaders,” “Representatives,” or officers invested with a belief in their power over us.

•  What we now experience as the “educational system” is a highly sophisticated product of many generations of psychological enhancement that operates directly counter to what common sense will tell us will build a strong society.

To truly come into my own power, I must first accept others coming into theirs without any conditions or personal preferences.

•  In our current model, we are hypnotically addicted to the idea that we must attain preeminence over others.

In order to open the flow of energies (goods and services) from others – and from Source – I need to open my inner source, for energies to flow outward, producing value that is under demand by my fellow beings.

•  Because of the repressive strategies used by people operating “under color” of authority – Typically as “governments” or government-privileged institutions, i.e. corporations – we are now impeded from offering many kinds of essential goods or services that can potentially solve critical issues we now face.

One area in which people such as Marc Stevens are producing value for others is in teaching them to protect themselves from invasion and usurpation of their time and energies by people trying to use others to gain illegitimate advantages for themselves. Ultimately, these kinds of services can develop into voluntarily accessed alternatives for many of the functions of “governments.”

•  This is highly inconvenient to the purveyors of the worldwide system of control by violence. The system is now coming under the unprecedented threat of the awakening of populations the elite ruling consensus depend on to provide the skills and energy to maintain their hegemony.

•  It seems that now, in the early 21st Century, the control agenda has become so developed and pervasive that it is threatened by the arising of any human capabilities not under direct control of the elites. In particular, new ideas in the areas of energy, health, agriculture, social organization and human development directly menace the interlocking institutions of repression.

The idea of political power is that any means necessary must be employed to enroll the levels of agreement and compliance in the population to attain desired political goals. This amounts to coerced control; war by other means. Once a political process has secured the impression of agreement, or “manufactured consensus,” then State violence is employed in enforcing “democratic” policy. In this sense, political methods violate the basic principles of Voluntaryism.

•  As to how we can “get there from here,” the specific pathways are not yet clear. However, if we commit ourselves and adhere to the principles of Voluntaryism, this clarity is certain to emerge. If we steadfastly refrain from violation of others’ lives, are faithful to voluntary agreements we make, and are always open to feedback, criticism, and correction of mistakes, methods of development and social organization we’re not yet aware of will be found. If we lose our resolution and cut corners, we will return to the descending course of our increasingly dangerous fall into corruption.

The transition to an all-voluntary society is the paradigm shift that most of humankind now intuits is coming. The idea is radical: going to the root of the delusions and illusory goals that have plagued us throughout history. Yet at the same time, it is very simple. As we go on, we will feel and intuit more easily those times when thoughts arise of acting in violation of the Sacred Space of others. Avoiding those mistakes, we will gradually feel more free, and more unencumbered with troubled consciences and fears. As these skills begin to become realized, we’ll be on the verge of entering a new world.