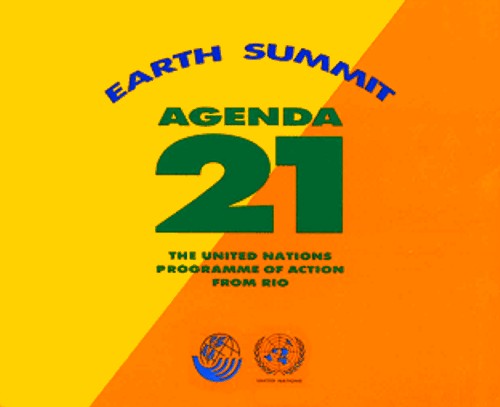 Agenda 21 is an action plan or blueprint for a future desired by its creators. This desired future is shrouded in feel good environmentally protective development and innovation, otherwise referred to as green, green movement, and/or environmentalism. Sadly, Agenda 21 is an utter ruse for representing, to many activists and activist groups, a darkly dystopian future as being utopian. There is a larger picture to Agenda 21 that many people either refuse to acknowledge or are determined to deny.

Agenda 21 is one of several pincers in a concerted program. Most people don’t realize precisely what Agenda 21 does, and many don’t acknowledge that it will be a nightmare for the vast majority of humanity. Unless you’re a Bureaucrat, Technocrat, Bismarkianist or member of the elites, as well as a psychopath/sociopath, Agenda 21 is nowhere near a utopia. Its principle underlying tenet is rigid control, with the destruction of rights, liberties and freedoms and their transformation into mere privileges at the discretion of those in control.

Unfortunately, Agenda 21 is much more sophisticated, as it is coupled with multiple prongs that implement its active development. The first is Bismarkianism; this is a three-stage process using a bait and switch to manipulate people into tolerating and accepting expansion of centralized control through globalized governance.

The first stage is socialism, as this creates incentives for the populace to support implementation of public-private partnerships, rewarding fiefdoms, and granting benefits that pacify the populace. Once this stage is in place, public relations or propaganda is used to shift into national socialism that entails making many of these public-private partnerships into permanent parts of the state apparatus.

It isn’t much of a stretch to speculate that after the next economic crisis strikes the United States, public-private partnerships will start becoming fully merged. It looks like the first solid official merger will be of government with banking, through the Federal Reserve. With this centralized public-private government-banking partnership, established in 1913, and with the addition of the corrupt and unprosecuted fraud of designating banks as Too Big To Fail, the result will be a private banking authority with official state power. Public-Private mergers can then repeat this Progressive meme to enable the acceptance of the official establishment of totalitarianism, the creation of an invisible oligarchy with absolute authority.

Some readers may be skeptical about this. However, this will facilitate the approaching “democracy” movement. Masses will be manipulated into denying the rights of various minorities. Congress will become little more than a rubber-stamp under the President’s authority, no longer a separate Constitutional body with checks and balances separating it from the “Unitary Executive.” Centralization will be able to further entrench itself through welfare and warfare aka bribes and “security.” This is perhaps the main mechanism driving Agenda 21, as it combines welfare, interstate commerce, re-interpretation of the supremacy clause, and national security.

The next prong is the Malthusian and Eugenicist merger and re-imaging of Eugenics through Neo-Malthusianism and women’s health/reproductive health. The Neo-Malthusianism prong is perhaps the most hidden of the prongs, though with more visible components such as women’s health/reproductive rights and transhumanism. These prongs would not be complete without the supranational/universalist movements. This is where Agenda 21 operates as a supranational action plan to be coordinated through local implementation, completely altering the Constitutional relationships of local, state and national governments to become regional government “stewards” or soviets of the supranational body. In this particular case, the supranational body and its subsidiaries will be evolved from the United Nations.

These make up a non-exhaustive list of the prongs of Agenda 21 and what they are designed to do. This is to consolidate and expand power behind a centralized authority under the control of the global elites.

Agenda 21 is not compatible with inherent individual rights and freedoms. It is a Collectivist movement. One of humanity’s oldest struggles is between individualism and Collectivism under elite control.

The difference between a collective and a community is that: In a community a group of individuals live in proximity to one another and people work together through cooperation for mutual benefit, protection, and livelihood. Collectives operate under mandates for each individual to accept “rights and responsibilities” dictated by the governing body, which creates separate categories of individuals with different statuses in order to promote its control. This is divide and rule, like a hive or ant colony, not a community. Every individual’s benefit to the Collective is really his or her benefit to the governing regime; the individual is of little to no inherent value in such a system.

In the movie Swordfish, the John Travolta character asks “If you could cure cancer but had to kill one child, could you kill that child?” The Collectivist answer is not only a resounding ‘YES!’ it also dictates that the child should gladly be willing to die, even in great pain “for the greater good.” Why is this relevant? Agenda 21 strips individuals of their unalienable rights, liberties, and freedoms and instead grants them privileges and responsibilities at the governing regime’s discretion. This is slavery. The whole march of the United States toward the despotism, authoritarianism, and totalitarianism of a Police State, and the erosion of the Constitution, which supposedly exists to protect natural rights, is driven by Agenda 21, with its Neo-Malthusianism and planned full merging of public-private partnerships under state authority. In fact, Agenda 21 names every human being in the world, as well as everything in Nature, as only a piece of capital and a resource to be inventoried and allocated. This is an enslavement designed to force people to love, yearn for, and even insist on the servitude of all, the ultimate triumph of Collectivism.

Agenda 21 is an action plan that is being implemented at the local level but is derived from the supranational institution of the United Nations; it is a plan or blueprint designed to turn us all into collective capital and resources. We are to be enslaved with privileges that can be revoked in an instant at the whim of any bureaucrat placed over us by the elite consensus, and with the forced responsibility to do their bidding. Agenda 21 is shrouded in feel good activism from the environmental/green movement; its implementation can only be halted through informing ourselves about what Agenda 21 is and refusing to comply with its implementation.

Agenda 21 operates under the rubric of sustainable development that plans for environmental accounting of human, land and resources in the interests of the Collective. It mandates that every human project needs to be given permission by the soviet control apparatus. Every one of us is to be only a resource under the control and allocation of sustainable development. Bill Gates once announced that the only way to bring down CO2 emissions will be to bring population, consumption and production down to near zero. Sustainable Development effectively means suppressing class mobility, consumption, freedom and, ultimately, population. These policies will result in widespread starvation, war, poisoning and despair. This means that Agenda 21 is an action plan hiding its true intentions behind a smokescreen of feel good activism to enable its full tyrannical implementation in the name of environmental welfare.

Adapted with liberties from: www.activistpost.com/2013/06/the-multiple-prongs-of-agenda-21.html