Gun Violence and the Spell Cast by Santa Cruz “Government” 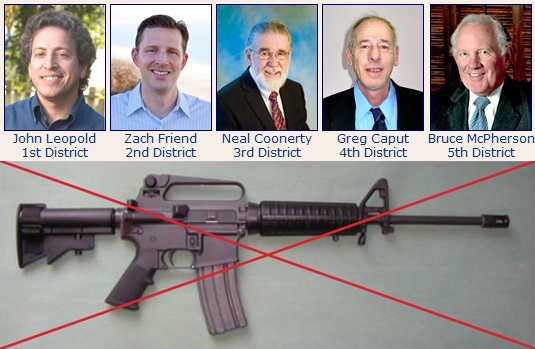 On Tuesday, Feb. 26, the Santa Cruz Board of Supervisors met to deliberate on the second phase of John Leopold’s initiative to, as he claims, protect the people of his County from the dangers presented by gun stores. While there was a storm of interest in the Jan. 15th initial unanimous passage of Leopold’s proposed Moratorium on gun store permits, on Tuesday by the time the Supervisors had conducted a lengthy County Workers’ Awards ceremony and a presentation on solid waste management, along with a lunch break, there were only a handful of people left to observe the vetting of the proposed new ordinance.

The ordinance had been brought to the Board by County Counsel Dana McRae on a tight timeline to meet with the deadline on the soon-to-expire 45-day Moratorium. Along with the Supervisors’ approval for moving forward on the new ordinance, they also approved an extension on the Moratorium. This will essentially end the hopes of the applicants who’d applied for a permit to open their gun store in Live Oak.

The ordinance text from McRae includes many provisions culled from other counties’ gun-safety ordinances, most of which are common-sense and general standard practice for gun stores. However, it also includes mandatory “set-backs” requiring that stores be sited varying distances from Schools, Day-care Centers and Parks. A map on the wall of the Chambers showed the impact that these set-backs would have on available locations for new gun businesses in Live Oak. These showed that approximately half of the area would be off-limits under the proposed ordinance.

When comments were allowed from the very few remaining onlookers, I pointed out that the set-back provisions had no reasonable effect on public safety, and merely interfered with their constituents’ freedom to govern their own lives. However, as if to underscore the Supervisors’ power to control peoples’ “land-use,” when instructing Counsel on the language to bring back to the Supervisors the next week for a first-reading of the new ordinance, John Leopold asked that an additional set-back of 300 feet from any areas zoned as residential be added to the ordinance. I suspect that this will not leave much of Live Oak available for siting gun stores.

What (or who) is benefitted by these provisions of the proposed ordinance related specifically to places associated with children? The primary effect I see is that guns are again associated in the public mind with a need to “protect the children” from “gun violence.” The Supervisors deny that this initiative by them has anything to do with the anti-gun hysteria sweeping America. The upshot is a continuing amplification of a push from a nationally Federalized governmental administrative structure (including the corporate media) to manage the American people using duplicity, public relations and fear.

It’s highly synchronous that this meeting took place on the same day that Santa Cruz had both an anti-gun demonstration at the Town Clock (at which Supervisor Leopold spoke) and the brutal murders of two police officers by gun-fire. The dramatic shootings, unlike the many recent incidents in which women, men and even young people have defended their lives and families with guns, became national news, adding to a general perceived urgency to “do something NOW to end gun-violence.” While such feelings are understandable, there doesn’t seem to be much, if any, informed discussion of the situation around our Constitutional possession of arms, particularly in the context of a Federal government which uses its military might to murder children around the world for political expedience. The policies recently announced by Sec. of State John Kerry, among others, to directly provide weapons to the “rebels” in Syria who are murdering Syrian civilians wholesale, are one example of the ongoing hypocrisy which is not mentioned. Most people who seem unconcerned about the possibility of malfeasance by a government that purports itself to be responsible for protecting us, are not aware of the concerted effects of encroaching surveillance, militarization of our police under Federal command, and “laws” like the P.A.T.R.I.O.T. Act, the NDAA and Barack Obama’s 1,000 over-reaching Executive Orders which seem to outline the structures of something that resembles a dictatorship.

It’s perhaps also synchronous that the Feb. 26 Supervisors meeting also included the unanimous approval by them of the Santa Cruz County Climate Action Plan, a 158 page document that will cause unknown impacts on Santa Cruzans’ way of life for years to come. The origins of this plan are shrouded in obscurity, while County planners claim that it is in response to California mandates designed to take action on “climate change.” They say the science is not subject to debate. As the Supes voted to make this unwieldy document County policy, Board Chairman Neal Coonerty said something to the effect that “Even if the (climate) premises of this are wrong, it’s better to err on the side of caution” – even if the well-being of the people they purport to represent is violently compromised.

In the cases of the upcoming gun store ordinance and of the Climate Action Plan, we have been given almost no information about what is being done in our names. If you choose to take a half a day out of your busy life to attend a semi-weekly Tuesday morning meeting, you may be given three minutes to respond to the business of “your” county government. Almost no one was there to do that this week when these important measures were rubber-stamped.