Fair Use Notice: This site may contain some copyrighted material the use of which has not always been specifically authorized by the copyright owner. We are making such material available in our efforts to advance understanding of vital issues which already exist in the public domain. – Note: These links are posted at the top of the page as the week progresses. Links from previous weeks can be found under the “Current Quicklinx” button

Biden aims to sign on to UN’s global gun registration treaty – by Paul Bedard – https://www.msn.com/en-us/news/politics/biden-aims-to-sign-on-to-uns-global-gun-registration-treaty/ar-AANZlyi – “The Biden administration this week signaled that it is eyeing a United Nations small arms treaty that critics claim will lead to an international gun registration plan — including for individual American gun owners… Two years after former President Donald Trump withdrew from it, a top arms diplomat at the State Department told the global body that the current administration is swinging behind the Arms Trade Treaty… ‘I have come from Washington, D.C., this week to take the floor on the agenda item Treaty Universalization to underscore the continuing commitment of the United States to responsible international trade in conventional arms,’ William Malzahn said at the 7th Conference of States Parties to the Arms Trade Treaty... ‘The United States has long supported strong and effective national controls on the international transfer of conventional arms, and the Arms Trade Treaty is an important tool [for] promoting those controls internationally,’ he said according to a transcript provided to Secrets by the lobbying arm of the National Rifle Association… The NRA has warned that, among many moves, the treaty will require all arms that Americans buy from overseas makers to be tracked. To do that, a global gun registry would be created and maintained for 10 years. Every owner will be listed on that registry… ‘This is the first step towards creating a global firearms registry,’ said the Second Amendment advocacy group.”

Besides Fetal Deaths, Breastfeeding Babies are Dying and becoming Sick following Mothers’ COVID Shots – by Brian Shilhavy – https://healthimpactnews.com/2021/besides-fetal-deaths-breastfeeding-babies-are-dying-and-becoming-sick-following-mothers-covid-shots/ – “Back in April this year we published a video commentary by ReallyGraceful where she reported that many mothers who were nursing their babies had their breast milk dry up after taking a COVID shot…. As more and more data is entered into the government Vaccine Adverse Event Reporting System (VAERS), we are now seeing cases where babies that are breastfed are suffering adverse reactions to the COVID shots that their mothers are taking. The shots have not yet been authorized for infants, although such an authorization is expected any day now… Celeste McGovern of LifeSite News reported on one case where the breastfeeding baby died with blood clots, something rarely ever seen in infants, but a common side effect we are seeing with people who take the COVID shots, blood clots which the CDC states are “rare” in spite of the data in VAERS that shows over 10,000 cases of “thrombosis”, including 488 deaths… VAERS report ID 1532154 was apparently filed by the mother, a 36-year-old woman from New Mexico: On July 17, my baby passed away… I had been breastfeeding my 6 week old baby at the time that I received the first Pfizer vaccine on June 4, 2021… He became very sick with a high fever about 2 weeks after I got the first Pfizer vaccine on June 21. He was treated for 2 weeks with IV antibiotics for a supposed bacterial infection… However, they never found any specific bacteria, and called his diagnosis culture-negative sepsis. At the end of his hospital stay he tested positive for rhinovirus… After the 14 day course of antibiotics, he was home for one week, but exhibited strange symptoms (e.g. swollen eyelid, strange rashes, vomiting)… I took him back to the hospital on July 15, where he presented with what they called an atypical Kawasaki disease… He passed away shortly thereafter from clots in his severely inflamed arteries.”

Statistical Method Used to Link Climate Change to Greenhouse Gases Challenged – by Nathan Worcester – https://www.theepochtimes.com/mkt_morningbrief/statistical-method-used-to-link-climate-change-to-greenhouse-gases-challenged_3983949.html – “A new study in “Climate Dynamics” has criticized a key methodology that the Intergovernmental Panel on Climate Change (IPCC) uses to attribute climate change to greenhouse gases, raising questions about the validity of research that relied on it and prompting a response from one of the scientists who developed the technique… The new study’s author, economist Ross McKitrick, told The Epoch Times in an exclusive interview that he thinks his results have weakened the IPCC’s case that greenhouse gases cause climate change… The methodology, known as “optimal fingerprinting,” has been used to link greenhouse gases to everything from temperature to forest fires, precipitation, and snow cover… ‘[They] take this big smudge of data and say, “Yeah, the fingerprints of greenhouse gas are on it”,’ he said… McKitrick said the optimal fingerprinting research he criticized, 1999’s paper in Climate Dynamics “Checking for model consistency in optimal fingerprinting,” is a ‘cornerstone of the field of attribution’—the branch of climate science focused on identifying the causes of climate change… But according to McKitrick, the authors of that paper, Myles Allen and Simon Tett, made errors in the steps needed to validate their strategy.” 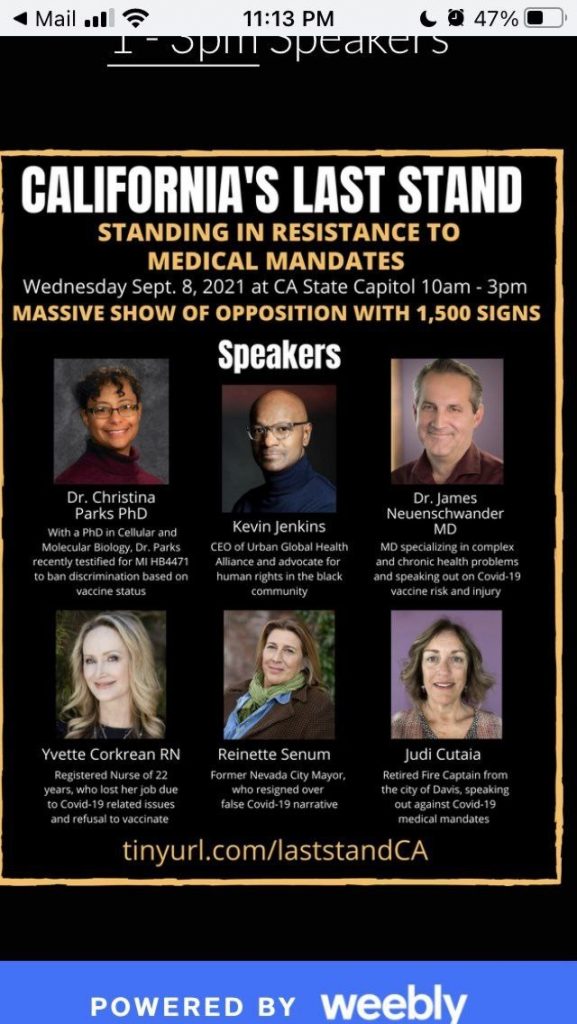 PROOF THAT THE PANDEMIC WAS PLANNED & WITH PURPOSE – by Dr James Fetzer – https://rightsfreedoms.wordpress.com/2021/05/14/proof-that-the-pandemic-was-planned-with-purpose/ – “A group of over 500 medical doctors in Germany called ‘Doctors for Information’ made a shocking statement during a national press conference: ‘THE CORONA PANIC IS A PLAY. IT’S A SCAM. A SWINDLE. IT’S HIGH TIME WE UNDERSTOOD THAT WE’RE IN THE MIDST OF A GLOBAL CRIME.’.. This large group of medical experts publishes a medical newspaper on 500,000 copies every week, to inform the public about the massive misinformation in the mainstream media. They also organize mass protests in Europe, like the one on August 29, 2020 where 12 million people signed up and several millions actually showed up… Why do these 500+ medical doctors say the pandemic is a global crime? What do they know, that we don’t?.. IN 2015 A TESTING METHOD WAS PATENTED FOR… COVID-19.. In 2015 a ‘System and Method for Testing for COVID-19’ was patented by Richard Rothschild, with a Dutch government organisation. Did you catch that? In 2015 – four years before the disease even existed – a testing method for COVID-19 was developed… Take a deep breath and let that sink in for a while…”

New York Health Commissioner Repeals Mask Mandate for Unvaxxed after Federal Lawsuit Filed – by Children’s Health Defense – https://www.globalresearch.ca/new-york-health-commissioner-repeals-mask-mandate-unvaxxed-federal-lawsuit-filed/5754962 – “Children’s Health Defense supported the lawsuit filed by William Ouweleen which challenged the constitutionality of the emergency mask mandate requiring unvaccinated people to wear masks while vaccinated people could go mask-free… The New York State Department of Health (NYSDOH) on Aug. 27 repealed an emergency mask mandate after a lawsuit was filed Aug. 5 in federal court challenging the regulation… The lawsuit was brought by William Ouweleen, vintner for the oldest dedicated sacramental winery in America. Ouweleen challenged the constitutionality of the NYSDOH regulation 10 NYCRR 66-3, which required unvaccinated people to wear masks while vaccinated people could go mask-free… Prior to filing the lawsuit, Ouweleen was twice cited by patrons of the winery for not wearing a mask, and was informed by the local health department he could be fined or closed down, or both, if additional complaints were received… In the complaint, Ouweleen alleged the regulation violated his constitutional rights and was not justified by science, citing confirmation by the Centers for Disease Control and Prevention that vaccination does not prevent transmission of SARS CoV-2… In addition to challenging the mandates on equal protection grounds, the suit challenged mask mandates in general.”