Is the Calif. “Cracking the Code” discussion list ENTIRELY OFF TOPIC?! 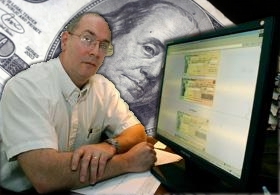 This is a post I wrote in response to Gregory, a list member who thought that our list on Pete Hendrickson’s methods of dealing with the (non-existent for working Americans) U.S. “income” tax was migrating into total B.S. in talking about the nature of the “money” system.

Pardon me if I state the obvious. There is, according to many sources, over $1 Quadrillion (1,000 Trillions) of notional value out there in dirivative contracts alone. That’s over 10 times the value of EVERY THING in the entire world, including the real estate. This represents “money” loaned (out of thin air) by the (Rothschild) central banks and the rest of the “banking system” through “fractional reserve” money creation (and not even in accordance with “reserves” – banks have admitted that they create loans with computer bookkeeping entries as long as they have enough confidence that the sucke.. er, debtor has a pulse and the capacity and dim wits to repay the fictional loan with interest).

Then there’s the money loaned out “in the name of the (rogue) governments.” Neil Barofsky, Treasury Inspector General of the TALF (Toxic Asset Lending Facility) testified to “Congress” a year ago that since 2007 this amounted to 23.7 Trillion in the USofA in his estimation, all of which the people of the USofA are on the hook for (something on the order of $100k for every American baby born today), if we go like placid cattle to the abattoir.

Even the (what is in now? – 13 something Trillion) of the “official” national debt consists of taxation without representation and outright fraud. There is no social contract remaining, except for real and threatened violence and high-tech repression. All of the economic experts agree that NONE OF THE DEVELOPED NATIONS OF THE WORLD, not to mention the “emerging nations,” are going to be able to successfully “repay” their “sovereign debt.” What then? If we’re going to default anyway, let’s choose our OWN solutions, including that the debts we “owe,” including Mortgages, credit card debt, student loans, etc. are invalid because there are no valid contracts.

There is no way that we can be enjoined under the jurisdiction of terminally corrupt administrative law if we understand and embody our sovereignty. There will be a shift, and the usurpers will be politely but firmly informed that their money is no longer good here, and that their corporations have no power to contract with real people.

Or, we can let them usher in the long-planned one-world prison planet. Don’t think so, though.

ALL of the governments in the “free” world are privately held corporations operating under commercial law. Peter Dale Scott recently presented research that fairly clearly establishes that the US govt. is operating under Continuity of Government regulations suspending the Constitution by multiple Executive Orders, and that mandatory lawful action to establish the necessity of the suspension of Constitutional authority every 6 months is not being observed. Even Congress can’t get any information about what the exact state of affairs is. We are uniformly lied to and kept amused with Bread (as least for a while longer) and Circuses.

Gregory, I agree that Pete’s analysis of the law is substantially correct. It’s completely missing and avoiding the highly deceptive nature of our present situation, though. 7 or 8 years ago an assistant of Iverson’s said, in answer to a question from a reporter for the NY Times, that IRS was going to answer the questions of the Tax Honesty movement with more enforcement activity. What do you think that means?

1 Response to Is the Calif. “Cracking the Code” discussion list ENTIRELY OFF TOPIC?!